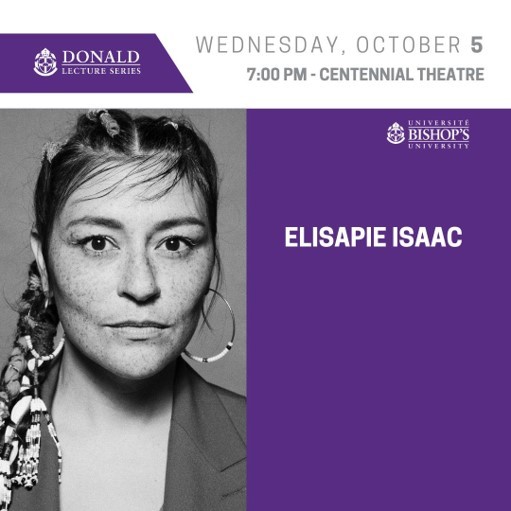 ELISAPIE
Singer-songwriter, actress, director, producer, and activist, Elisapie represents the wild and rough beauty of the North.
Released in 2018, her third solo album, The Ballad of the Runaway Girl, was shortlisted for the Polaris Music Prize, received a nomination for Indigenous Album of the Year at the 2019 JUNO Awards, and earned two Felix awards at the ADISQ Gala. Revealing the story of an expatriate Inuk through songs in English, Inuktitut and French, the album has garnered the attention of NPR Music and Rolling Stone France, in addition to taking Elisapie on tour across North America and Europe.
Elisapie will give a Lecture and may perform a few of her songs.

Made possible by the generous support of Bishop’s alumnus John Donald ’60, DCL ’12, the Donald Lecture Series brings speakers of national and international renown to the Bishop’s campus to provide insight, provoke thought, and stimulate debate on the most compelling issues and events in the world today. All lectures are free of charge and open to the public. Learn more about the Donald Lecture Series.